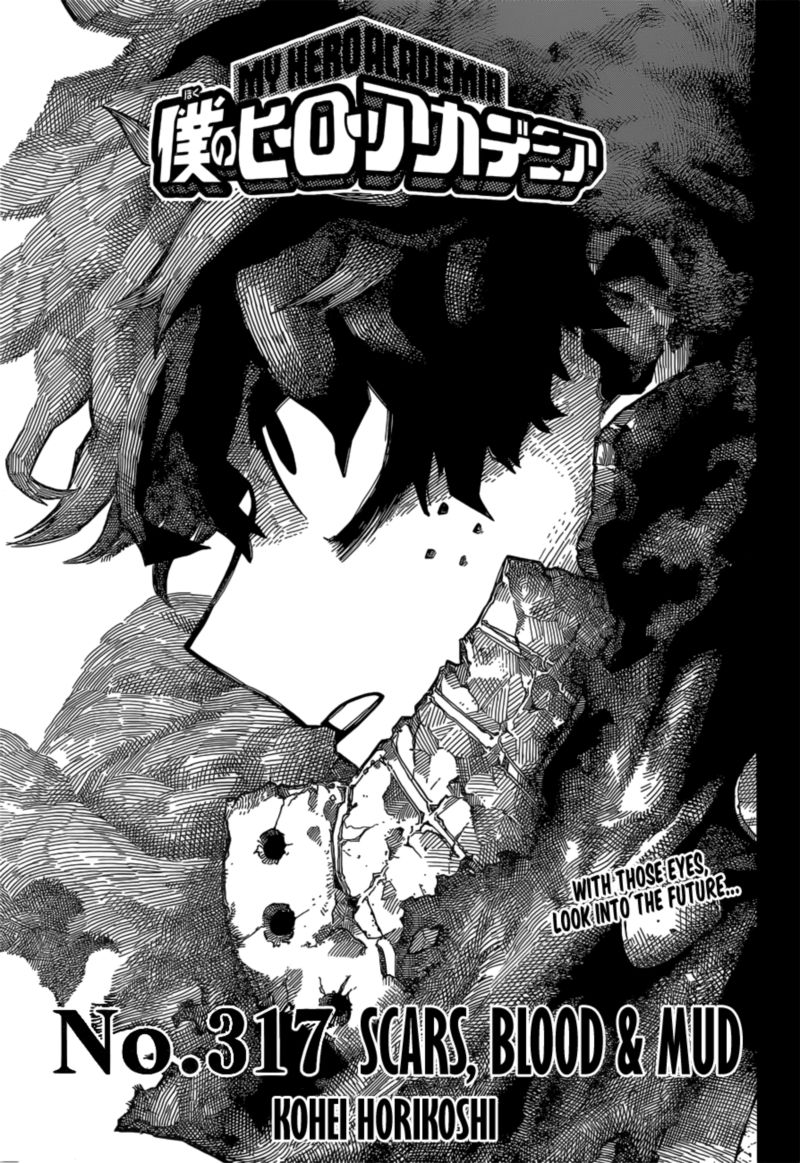 Earlier I wrote about spoilers for the then upcoming Chapter 317 of My Hero Academia, and it’s release worldwide has caused a bunch of discussion about the manga and protagonist, Izuku Midoriya. I’ve seen tons of different takes to this current Deku. Some are calling it super cool, some call it edgy, and I’ve even seen the rare take that this is ruining the character. Thing is, it isn’t cool, egdy, or whatever. It’s downright sad.

First things first, let’s talk about the reason this all came up. Spoilers incoming, of course.

And this is the panel that shook the internet with the release of the newest chapter, and I can see why. Deku looks downright evil. While his original hero outfit may have been made to imitate All Might’s pointy hair and bold smile, on a worn down teen it looks animalistic and threatening. The Black Whip moving around the panel adds to the eerie tone, as do the shoes which now look more like animatronic feet. He certainly doesn’t look like a hero right now. Thing is, this wasn’t done to make him edgy, cool, or badass. This was done to show that Deku is collapsing.

Our main protagonist has always been self sacrificial to a fault. He’s broken damn near every bone in his body at least once just from using One for All to save people, and he’s taken a fair number of beatings and losses even without the destructive force on his body. Early in the series he was warned that stressing his body this much can permanently handicap him, and he has the scars to prove it as well. What we’re seeing right now is the logical conclusion to his worst fault.

As mentioned prior, the hero outfit above was made to look like All Might’s in his prime. All Might was a Symbol of Peace and held the world up almost singlehandedly. His mere presence reduced crime. The story has continuously told us, though, that this was not a feasible society. All of UA had to rise to the challenge to create a generation of heroes that can work together to make a better world. All Might is an exceptional hero, but even he had a limit that’s since been reached. Deku may currently be as strong as 100% All Might, and that’s nothing to sneeze at, but he isn’t and wasn’t supposed to be All Might.

Everything Deku has been doing since the end of the last arc has been his self sacrificial nature being fed into over and over, and it’s tearing him away from everyone and everything he cares about. He felt he was a danger to the school and his friends, so he left to do hero work with the pros. Now, even just doing work, he got attacked by a dangerous villain that he tried to save and what did that get him? She’s barely alive, they all fell into All for One’s trap, and the resulting explosion could have killed the heroes that accompanied Deku.

Both Horikoshi and All for One know what they’re doing. They’re pushing Deku to the absolute edge of his psyche. Sure, he’s far stronger than ever before with near perfect control of (almost) every Quirk One for All has to offer. Most villains aren’t even close to a threat for him anymore, and the chapter even shows it. He’s so scared of hurting ANYONE near him now that he won’t even stop for a full conversation with his mentor All Might because another villain could have been a bomb in disguise. At all times he’s in full paranoid mode because heroes are dropping like flies, villains are more organized and threatening than ever before, and he has a giant target on his back at all times.

To make an observation, Deku is becoming All Might and this is a tragic thing to watch in real time. The theming of Deku reaching out to All Might and wanting to be like him has been strewn all about the series, and we as a fanbase love seeing him become stronger and become the number one hero. At a surface level, Deku is where he wanted to be. He’s doing constant hero work every day saving people with his inspiration’s Quirk, wearing an outfit inspired by All Might (he even has the cape now too), and is stronger than Endeavor, the number one hero.

And yet that can’t be further from what’s happening. Deku is running himself dry every day holding an entire country on his shoulders. He’s wearing a crumbling, blood soaked uniform that looks like that of a villain and a literal mask that hides his face and emotions from everyone. The symbolism that he’s crumbling down can’t be much more obvious.

At this point in the story, our protagonist is a already self sacrificial kid to a fault being thrust into a role he could never fill on his own, and it’s going to be his downfall. All Might’s final words as a pro hero have been coming up tons of times recently. “You’re next.” This time, All for One is the one using these very same words on the same person. This is all building to something for sure, and I’ve got a bad feeling something terrible is going to happen soon.

What is the BLUE BOX Game Studios Conspiracy?