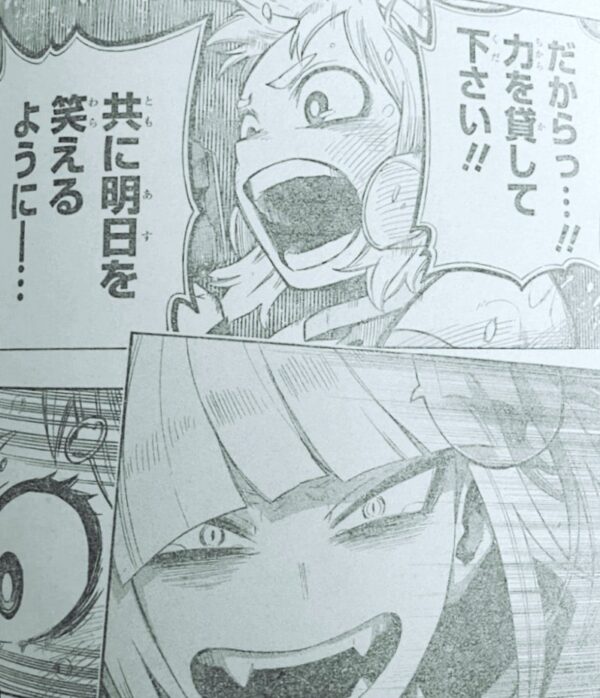 Another week passes and as such does a new MHA chapter debut. Thankfully we’ve gotten two chapters in a row without any delays, so the story continues on. Here’s everything you need to know about MHA 324, including the usual plot spoilers, panels, and chapter title! Speaking of, this title is pending due to Japanese pronouns, but the main guess is, “A teenager’s Request.”

The chapter starts with a flashback to Ochako’s youth while the current Ochako continues her speech. She comments that she had loved seeing people’s happy faces. She continues that, despite being with heroes in action, she paid attention just to the people’s expressions, not other heroes.

The citizens finally notice the horrid shape Deku has been in ever since being brought back. One woman comments that he immediately ran off to do more hero work after just saving the woman. Even so, they’re justifiably scared, but Ochako assures the crowd that they just need to give Deku enough time to clean up and finally get some rest.

The class watches the impassioned speech, Iida noticing how hard she’s working to have everyone smile even in a situation like this. While Deku crying is nothing new, it is nice to see him let it all out again with a “Uraraka!” scream.

Ultimately, Ochako realizes they may not have the tools to calm people down, but explains that heroes are just as scared as the general public, and that they’re all just people. She continues to worry about who can save heroes, showing a number of heroes including Aizawa.

Uraraka begs the people to help them work together, as the times are dire. After being reminded of Toga, she hesitates, but continues to plead that the people stay here while Deku rests. After all, he’s may carry a huge power, but he still is just a young high school boy with a massive weight placed upon him. This prompts the waterworks even more as Deku falls to his knees, crying even harder as he remembers the first time he met Ochako.

In a stunning display from Ochako, we get a double page spread of her yelling at the people to let Deku stay at UA as he continues to kneel. As one may recall, the opening narration was that this was the story of how Deku became the greatest hero. Deku narrates here, adding an “and also…”

“It is the story of how we all became the greatest hero,” is narrated as Kouta rushes to the crying Deku alongside the woman from before. End of MHA 324

I take back what I thought about this being more of a filler chapter. God. Uraraka is so GOOD. Deku letting it all out… Kouta being a surprise MVP. I’m going to stop gushing here lest this take another three paragraphs. Let’s hope the next chapter is even half as good.

I love My Hero Academia.