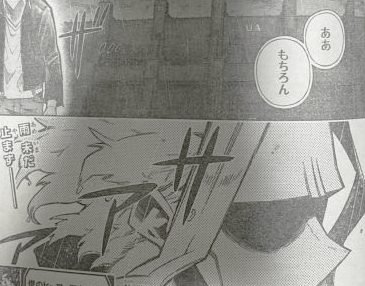 My Hero Academia has been on an absolute winning streak with the past arc, and three weeks with no delays is music to my ears. Leaks have surfaced about MHA 325 courtesy once again of Atsu, and I’m here to compile all the new chapter’s info in one centralized space. As of this intro, I’m waiting just as impatiently as the rest of social media to sink my teeth into the new chapter, but boy do I hope there’s some more great Deku and Ochako content.

As always, spoilers ahead! The first of these would be the title: “Connected by One For All.”

MHA 325 opens with Kouta referring to Deku with a Nii-chan, showing that he views the boy as an older brother. Considering his parents aren’t around, this distinction for Deku as family is pretty important. The woman from previous chapters shows her appreciation further, as her Quirk kept her from many citizen shelters. Even so, the two are happy to see Deku again, calling him “Mr. Crybaby Hero.”

A moment of clarity takes over the citizenry. One man comments that Deku clearly needs to rest for a bit, and that others are being irrational. As normal people, they watched All Might and save the country all alone, and never once thought to looks beyond the hero outfit. Seeing as how many heroes threw in the towel, clearly the ones left have to be stronger than ever. He asks how long they can sit by and watch.

The skeptic talks about his confusion regarding the various rumors about Deku, and asks if the boy could possibly return things to normal if given the time to rest. While he can’t assure anything, Deku promises that everyone will fight for that normalcy together.

Ectoplasm meets up with Endeavor, Hawks, and Todoroki, who are late to arrive to U.A. When asked about Uraraka’s speech, Endeavor blames himself that the situation ever got as bad as it did, as, were he a better mentor, Deku wouldn’t have wondered lost and without progress. Hawks is sure to correct him, fundamentally understanding that One for All grows with every person it touches, not merely those who inherit the power. All Might connected to Izuku, who connected with Class A, who connected to the citizens and so forth.

In the fruits of her labor, the citizens can be seen giving umbrellas to all the students. Hawks comments that if everyone in society thought about it as a whole, a society in which heroes work 24/7 would no longer be needed. Todoroki then makes sure to remind Endeavor that they can stop Touya together.

The scene shifts to Nezu, who is currently talking with Aizawa. The teacher is incredibly proud of his class doing what even Nezu couldn’t, but this train of thought is interrupted by Nezu asking about the injury, revealing a prosthetic leg. Miruko seems to have had similar treatment.

Additionally, Kurogiri is being kept in a hospital, but any provocations to get him to talk fall on deaf ears, though Nezu is confident in progress being made. Toga is also currently under the radar, but her maximum transformation time has been discovered, so U.A. can isolate citizens before allowing them access into the facility.

Aizawa comments that it is time for revenge, and the final panel shows All Might standing near the barrier with a near unreadable look on his face.

That’s all for MHA 325, and with a rather chilling ending to boot. I worry the heroes may be too quick to try and get “revenge.” For one, it isn’t very heroic, and even with US reinforcements, it doesn’t seem the heroes have the manpower to stage a real counterattack yet. Something is gonna go wrong.