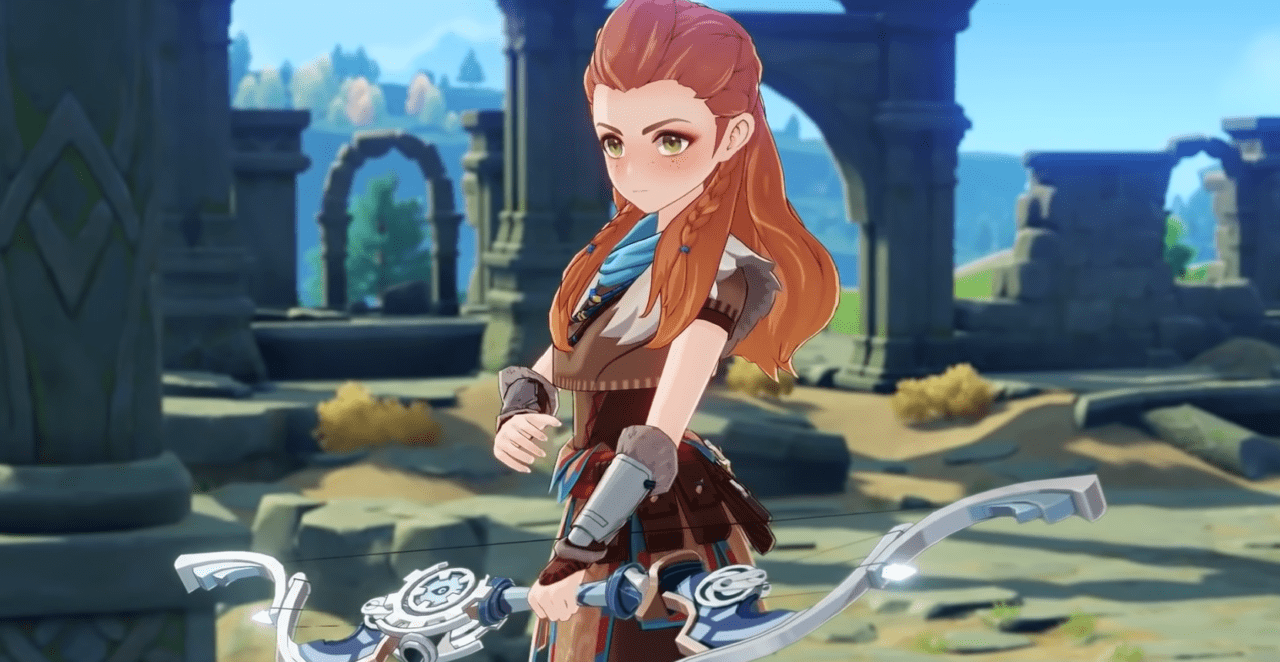 Coming from Horizon Zero Dawn, Aloy is here, and we’ll show her best build, talents order, and team comps to make the Savior from Another World the best hunter in Teyvat! She’s the first collab character for Genshin Impact, and is given for free!

Aloy is given for free through in-game email for every player with Adventure Rank 20 or higher. She’s a Cryo Bow user, just like Diona and Ganyu, but her gameplay very is different from both of the other girls, and it’s time to show why!

Aloy’s best builds make use of her abilities since her Normal Attacks scaling isn’t that impressive for a Physical DPS build (which is not impossible, though). But when using her Elemental Skill, she imbues her attacks with Cryo, and her Burst is a nice nuke button.

With that said, her two main roles are as a pure Cryo main DPS or an explosive Sub Dps, focusing on her ultimate. The problem is that her infusion is not easy to pull out as Hu Tao, for example, and her autos are still not that great.

With that said, she might be better for simply exploding enemies with her Burst, but she’s viable for both roles. Her desired statuses are as such:

Being Cryo, she gets extra Critical Rate from the Cryo Resonance and the Blizzard Strayer artifact set. If you’re going for its 4-piece, Critical Rate is not that necessary, assuming the target will be frozen when she’s on the field.

As already mentioned here, this is the safest option for every Cryo DPS out there. It gives Aloy the Cryo damage she needs, alongside a nice effect that is best used on Freeze comps. Pairing her with Xingqiu, Mona or Kokomi is great to apply it almost 100% of the time.

If used on Melt or Electrocharged teams, however, it may not be the best choice, and you might go with some of the latter options

The best option when going for a nuke Aloy build. Boosting her Cryo damage and her Burst at the same time, this combination is generally easier to achieve. It works for almost every team comp but has the downside of having to focus a little bit more on Crit Rate.

A more recent artifact set, it works best for main DPS Aloy and not that much for her Burst build. It grants her some extra auto-attack bulk in exchange for some energy and Burst damage (since you’re missing out 15% cryo). It’s a good alternative for Blizzard Strayer if you’re not going for freeze comps.

Lavawalker is a viable set for melt comps if you remember to always apply Pyro first. Otherwise, it will not grant you any bonuses and you’re better off with any other option.

Blizzard Strayer can be mixed with 2 pieces of Gladiator/Shimenawa, or even 2 Emblem pieces in order to have more energy available. But these should be last resort options while you still farm her perfect artifacts.

She has a good selection of weapons, and this version also introduced 2 new choices for her with the Polar Star and the Mouun’s Moon. Some of the best are listed below:

All of the 5-star bows work great on her. The limited ones in particular are better, but they are harder to get. Stringless can be even stronger than those at R5 if you’re going for Burst damage.

Rust is a good option to build for main DPS Aloy, but if you don’t have it, the Hamayumi bow is a good F2P call. You just need to complete its sidequest. Mouun’s Moon is viable but not the best since her Burst only costs 40 energy.

If you have it, the Windblume’s Ode bow is also good for creating reactions. And of course, if you play on console, go with the Predator bow, since it was literally made for her.

READ MORE: Genshin Impact 2.0: How to get the Hamayumi bow

Here’s a quick run of her abilities.

Her autos, as previously mentioned, are not that great, but are her main source of damage as the main DPS, so they should be prioritized, and her Elemental Skill comes second. You can gather her bombs with Sucrose, Jean, or Kazuha, and that makes it easier to proc her damage increasing passive.

Her Burst is a single explosion shot in front of her, which deals a lot of damage and has many reaction possibilities. Always use it after applying any other element to the opponent. With Viridescent Venerer’s debuffs, it can deal some even nastier damage.

As you should already know, Aloy has no Constellations. This may be the case for every other collab character to come, but nothing is confirmed at the moment.

Her constellations currently say that “The time has not yet come for this person’s corner of the night sky to light up”, which implies that, somewhere in the future, her constellations will also shine brightly.

Just like she has a lot of build paths, Aloy has many team options, and some are the best at their designed functions.

Keep her with another Cryo character in the team to achieve the Cryo resonance. This will help not only her but all of her team with extra Crit Rate. Diona, Kaeya, and Rosaria are some good options.

For main DPS, you can pair her with Xingqiu to permafreeze your enemies with his Burst + her Cryo autos. If you’re going for sub-DPS, Mona and Kokomi can do a similar job of applying Hydro.

In melt comps, Xiangling and Bennett will be good partners for her. If you have Hu Tao or plans to roll for her, Aloy might be a good complement to her team. Use Hu Tao’s Burst first and Aloy’s second, or vice-versa.

For Electro comps, you might want to make use of Fischl’s 2nd ascension talent, which deals extra damage whenever an Electro reaction is made. Raiden and Beidou are also good teammates if you have them leveled.

The most important part might be the Anemo character, used to gather her bombs and apply Virisdescent’s debuffs. Kazuha and Sucrose are the best options, as they don’t require much to do their functions well.

Aloy works great as a sub DPS and can do some work for the main Cryo DPS. Even if she’s not at the same level as other 5-star characters, she can definitely hold her own against a few opponents, and she’s given for free, which is great.

Aloy’s best build is based on how you want to use her, and by being able to serve 2 different roles, she’s very versatile, and you might want to save a spot for her in one of your teams.

She’ll be the base for future collab characters in Genshin Impact and shows that even if those characters don’t bring anything completely new to the table, they can bring some fun interactions. And given they’re commemorative units, that’s more than enough.

Genshin Impact is currently on its 2.2 version, “Into the Perilous Labyrinth of Fog”, which introduces a whole new area to explore, as well as new enemies, weapons, events, and the return of previous limited characters and gadgets.

You can play the game for free on mobile devices including Android, iOS, Playstation 4, Playstation 5, and Pc on both miHoYo’s official launcher and Epic Games Store. A Nintendo Switch version is stated to be in development.

Back 4 Blood: Can you play the Campaign mode solo?