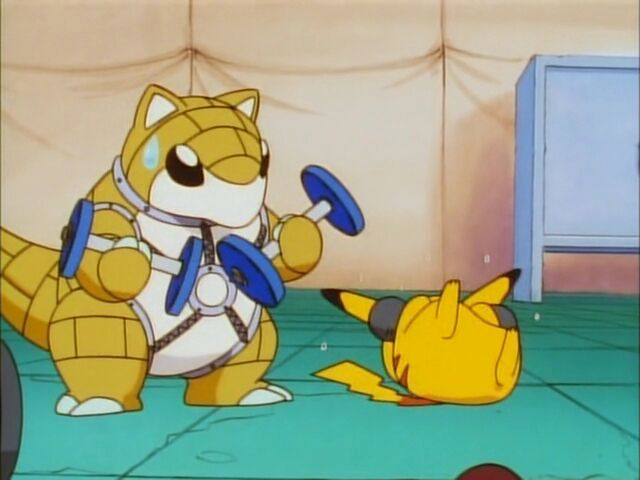 Pokemon based on real-life creatures

While there are many Pokemon that are unique and entirely original, there are also quite a few that are directly based on real-life creatures or animals. Some might be more obvious, like Pidove being based on a pigeon, but there are many that you might not recognize immediately.

Here are a few Pokemon that you probably didn’t know are directly based on real creatures.

Some people might be aware of this one, but Mudkip seems to be based on the cute water creature, axolotls. Axolotls are often mistaken as a sort of “walking fish”, but are actually amphibians. They do not change into land creatures like frogs though, but instead, they remain in the water with their gills.

Mudkip is clearly based on this creature, with a similar body and its orange cheeks/gills resemble that of an axolotl. It is also about the same size as an axolotl, coming in at about 16 inches. Mudkip is one of the three starters from the third generation and is undeniably one of the cutest.

You might think that Sandshrew is its own original design, but it is actually based on a real-life creature. Sandshrew seems to be based on the Sunda pangolin, which is found mostly in Southeast Asia. The Sunda pangolin is a mammal that often spends its time in trees, and is unfortunately critically endangered.

Sandshrew certainly resembles this animal, with the same textured body and claws. The only main difference is that Sandshrew’s body is intended to look similar to bricks, so one could argue that Sandslash’s pointy back might more closely resemble the Sunda pangolin than Sandshrew.

When looking at Poliwag’s tail, it is clear that it is based on a tadpole of some kind. What many don’t know, is the specific type of tadpole Poliwag is based on, which is the glass frog tadpole.

The glass frog tadpole is a very strange-looking creature, but luckily they managed to make it look a lot better with the design of Poliwag. The most accurate evolution to an adult glass frog is Politoed, as opposed to Poliwrath, which is honestly just an angrier and bigger tadpole, without the tail.

Personally, I am not a fan of bugs, or bug Pokemon, for that matter. Caterpie’s real-life counterpart, the eastern tiger swallowtail caterpillar, isn’t very easy on the eyes, except when it finally becomes a butterfly.

Caterpie has orange antennas that are very similar to something on the eastern tiger swallowtail caterpillar called an osmeterium, which is similar in color and shape which releases an odor to scare away enemies.

Caterpie almost exactly resembles this insect, right down to the eyes that are printed on its back. Luckily, just like the eastern tiger swallowtail caterpillar, Caterpie eventually evolves into a beautiful butterfly Pokemon, Butterfree.

This one is so strange that I am not even sure how to pronounce its name. Shellos is actually based on the Chromodoris Iochi, also known as Loch’s Chromodoris, which is a type of sea slug with bright blue and yellow colors.

Shellos is a Pokemon from the fourth generation, with two different types, with the pink and white version appearing in the West Sea, and the blue and green type appearing in the East Sea. In terms of which one most closely resembles the Chromodoris Iochi, it would certainly be the East Sea Shellos, with similar colors and body shape.

This creature is certainly interesting in appearance, and is often found in the central Indo-Pacific region. This might be one of the most surprising on the list, as it is a creature that many people have probably never seen.

This one is by far the creepiest of the real-life Pokemon creatures on this list. I would recommend looking up pictures of this animal at your own risk. Stunfisk certainly doesn’t appear scary in the games, but its real-life counterpart, the stargazer, makes it much worse.

This fish will hide in the sand and jump up quickly to capture its prey, which is what Stunfisk does in-game, as well. In some of the newer titles like Pokemon Sword and Shield, your character can walk over something on the ground that looks like a Poke Ball but is actually a Stunfisk that will jump up and attack you, triggering a battle.

Stunfisk also has eyes on top of its head, similar to the stargazer. We are just glad that Stunfisk isn’t nearly as creepy as the stargazer.

Luvdisc is technically based on two different fish, the kissing gourami and discus fish. This innocent-looking fish Pokemon was first introduced in the third generation and has a very memorable heart-shaped body. This body is based on the discus fish, which is heart-shaped but not quite as pronounced as Luvdisc.

The rest of Luvdisc is based on the kissing gourami, with a similar light pink color and pronounced lips. These lips are toothed and are used to rasp algae from surfaces. This action looks very similar to kissing, which is where its name comes from.