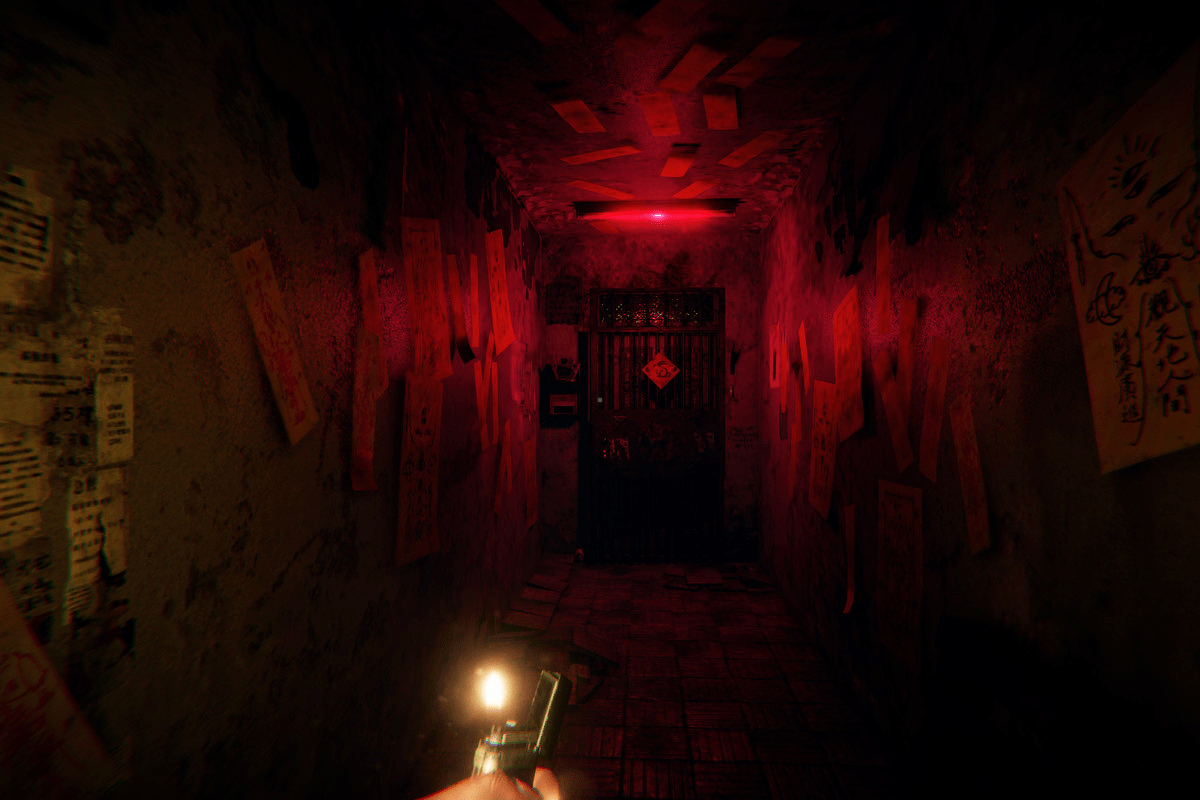 Familiar settings are probably the best place for horror to take place. The Exorcist’s horror worked in part because of the fact that the events were confined to a single home. Stanley Kubrick’s The Shining is terrifying and memorable because of the sprawling hotel the film is set in.

When it comes to making someone uncomfortable, you just need to remind them that horror can happen anywhere, regardless of how safe you feel. This is in part why Devotion is successful in its horror, as it invades the most intimate setting one could think of: the family home.

Despite being focused on horrifying the player, Devotion is an absolutely beautiful game. There’s no avoiding how gorgeous the game looks sometimes, even when things get tense in-game.

Even though most of the game takes place in an apartment complex, the environments you enter are varied and captivating. Small details are strewn about every room you enter, adding bits and pieces of backstory for the player to piece together as they explore. From a favorite snack to a dress or a vinyl record, every single in game asset is given immaculate detail, right down to things strewn about the floor.

Alongside the environment, Devotion makes sure to use sounds to unnerve you in the quietest moments. While exploring, you may hear dripping water, or distorted music that’ll make you wonder about that room that you just left not too long ago. Ordinary objects such as sheets of paper or suitcases become unnerving when accompanied by the distorted sounds of a television or the thundering patter of rain.

Red Candle Games have gone out of their way for the player to feel like they’re exploring somewhere lived in, and to also feel disturbed when that familiarity is twisted later on. As the environments deform and change, things like lighting becomes more intense and colors might become more saturated or desaturated.

All of these elements create an environment that is both familiar and haunting, as if the player is taking a walk through a nightmare.

A trip into terror

Devotion can be classified as a “walking simulator,” due to the fact that the gameplay is mainly walking around and exploring environments. Most of the time you will be entering different rooms and interacting with different objects, maybe placing them in specific places afterward.

This will feel dull for some people as there’s nothing that requires too much attention from the player (save for one sequence later on). However, the game makes sure to vary up the different sequences by changing character perspectives, or even changing art-styles briefly.

These mechanics work wonderfully in-game and create an immersive and haunting experience. However, there was one moment during my own playthrough when I was pulled out of the experience.

It hopefully is only something that happened to me, but controller support for this game was buggy. Trying move around with controller inputs made the game choppy and movement incredibly sluggish.

Using a keyboard and mouse worked just fine but for anyone who likes using a controller, this may be an issue.

That aside, each sequence the player interacts with is unique, and really shows the amount of effort and thought the developers put in crafting every scene. Something as mundane as reading as story book to your daughter becomes an adventure through a fictional world.

The quieter moments in the game make you forget that this is supposed to be a horror title, which makes the revelations later on all the more unnerving. With every scene that you play through, the horror only permeates further as each detail creates a grotesque image of the Du family’s ultimate fate.

The premise of the game is simple. You play as a father named Du Feng Yu, who has to explore his dilapidated apartment and piece together the events that took place. Along the way you are haunted by disturbing images and an entity that follows you several times.

The story takes twists and turns as details about Feng Yu and his family slowly arise throughout the game; every single room you walk through has a myriad of details that reveal something new about the family and world they inhabit.

Observant players will find the various documents that only add to the Du family’s fate, and add to the maelstrom of tragedy that is the ending of the game. All of these aspects of the story are held up by believable performances by the Taiwanese voice cast.

Every line spoken by each of the main characters creates believable people that get caught up in a situation that slowly spirals out of control. You can’t help but feel immense empathy for Feng Yu and his family, as they are all engulfed by the events of the game.

Devotion’s tragic story is juxtaposed nicely against its triumphant return to the internet, where everyone has been waiting for the past two years. While other horror games have come since its initial release in 2019, it still remains a master class in horror.

READ MORE: Horror game Devotion is back and ready to purchase

The fact that this game was able to survive the absurd and rather unfortunate events that took place after its release are nothing short of a miracle. Its quality has not been diminished in its absence, and it still provides an experience you’ll never forget.

Red Candle Game’s efforts should be commended, as they were able to create an experience that burns brightly among its contemporaries. There’s no experience quite like Devotion, as it will make you feel dread, anxiety, and sadness all at once. If you only play one horror game this year, make it this one.

Skater XL Review – Does it Redefine the Genre? (Xbox One)