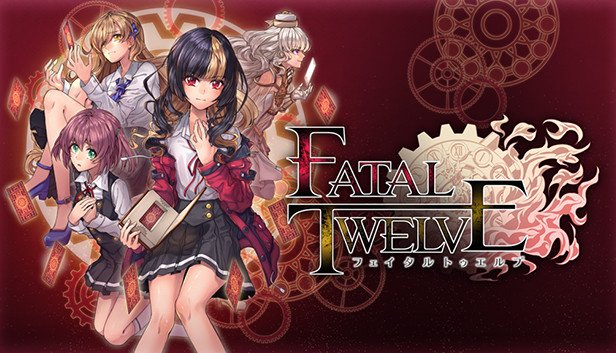 Well, lads, there comes a time in every journalist’s career where we must finally do the unthinkable, attach a “as objective as possible” rating to something we’ve played. That time has come for me. Without further ado, here is my Fatal Twelve review.

Disclaimer: There will be minor story and character spoilers. The most notable of which is revealed about an hour into the game.

As a small introduction: Fatal Twelve is an indie visual novel game crowdfunded through Kickstarter and released in early 2018 to the western world. It stars Shishimai Rinka, as well as a number of her friends after her untimely death at the hands of a train bomber.

Rinka wakes up to a completely normal hangout with her friends after the train blew up, much to her initial confusion and lack of memory of such events. After some small introductory scenes, it is revealed that Rinka, alongside eleven other people who died at the same time, must compete to be the only one to live past their untimely demise.

Without going too deep into things, the plot is at its most basic a killing game who’s tension relies on the characters’ abilities to sleuth around to find information on other participants and eliminate them permanently.

This central death game is the main focus of the plot from beginning to end, and acts as a vehicle for notable story beats, character development, juxtaposition to daily life, among other things.

I don’t want to spoil much beyond the premise, but the story was wonderful to me from beginning to end, with the most minor of pacing problems from time to time, and the occasional writing decision that can fall on deaf ears. In general, the moment to moment dialogue and narration is a pleasure to read with few to no out of character moments and constant suspense and mystery throughout.

As a minor note, as it doesn’t really fit elsewhere, I’d like to point out the attention to detail the writers had to varying cultures. The members of this game are from all around the world, though mostly Japan. Even so, its clear vast research was done into the cuisine, culture, architecture, and language of these varying countries to make each character feel believable and alive in this world.

As the primary focus of the story is the death game, its characters have to be engaging and interesting to keep the player hooked. Thankfully, Fatal Twelve excels at writing interesting and creative characters who all feel alive and dynamic, even when some simply have to die early in the narrative.

I’d like to first off state that there is not a single bad character in the game. At a bare minimum, each character acts believably in their situation and has consistent characterization throughout their scenes. Two characters fall to the wayside as average, though this is mostly due to being some of the earliest participants eliminated.

Fatal Twelve also has some of the best characters I’ve seen written in a visual novel. The protagonist, Rinka, as well as friend and fellow participant, Miharu, are amazing characters who have depth far beyond the initial tropes one will come to view them with. These two are the central driving force of the game, and it works wonderfully due to just how fantastically they’re written throughout the whole game. These two alone could carry the plot on their own in a weaker game, but this is the tip of the iceberg.

Other participants in the game are, on the whole, deep and three dimensional characters who you come to love or hate (in a good way) throughout their time in the plot. Even those who only are able to be in the story for an in game week manage to feel fully fleshed out and have wonderful character moments with other participants.

Special props to Participants XI and XII for blurring the line of what exactly antagonists are by being some of the most deep and rounded members of the cast. Their development is organic and a pleasure to read through yet still manage to create huge amounts of tension due to their roles in the plot.

The graphics are above the par of the average visual novel, at least in my opinion. While certainly anime in its art style, it isn’t oppressively so with all characters being visually distinct from one another. The level of detail in both the characters’ and locales is surprising for a game of its budget and genre.

Its somewhat hard to rate graphics as, ultimately its really a matter of how much they affect a game for you. For me at least, as a visual novel where one constantly has to look at characters, artwork, and backgrounds, it excelled about as much as one could hope. Unique artwork of special events is visually interesting and breaks up some of the monotony of staring at the admittedly well drawn characters and backgrounds.

I only have one minor gripe which I assume is a filter of some sort. In many scenes there seems to be a filter similar to a lens flare or something of the sort. It ultimately isn’t too distracting, especially once one gets used to it, but I noticed it enough throughout the game to find it worth mentioning.

On the next topic of “I gush about this wonderful game,” the soundtrack continues being a cut above the genre’s contemporaries. While many songs feel fairly standard for visual novels, a high school tune, tension themes, sad themes, etc, the character themes are amazing.

I should note that I’m not discrediting the “standard” themes of Fatal Twelve. Nothing is unpleasant to listen to; its merely standard of the genre. Character themes, however, were clearly composed to reflect all facets of a characters, before and after their development. Rinka, Miharu, and Participants’ XI and XII’s themes are all fantastic. To be honest, I bought the official soundtrack as the game is too small to have its OST uploaded to YouTube.

Well, this is a visual novel we’re talking about. The gameplay is really just… reading. If you’re well versed in the genre, you probably have an idea of how this goes. Reading, reading, choice that may affect minor dialogue or redirect the ending path the player is on.

At times I wished there were more choices that had interesting affects on the plot, as well as a bit more inclination that the decisions that DO majorly affect the endings, well, affecting the endings as much as they do. Really, I’d just recommend making multiple save slots so as to not screw yourself over.

There wasn’t really another area to put this, but one small inclusion that I absolutely loved were the pause screens. While simple, they show the name of the scene, the current song playing, a summary of things going on, as well as a paragraph long description of wherever the player paused the game. These little blurbs add small yet appreciated detail to all the locales of the game, and shows yet again the depths that the writers and developers went to for Fatal Twelve.

In case you can’t tell, I absolutely adore Fatal Twelve, and it is without a doubt my favorite visual novel ever, and a top 5 game ever for me. Giving certain aspects of the game in this Fatal Twelve review below a 100 hurts me on a level I wish not to share, but I do this in the name of something resembling objectivity.

It’s a game that feels so much more than the sum of its parts with one of the most engaging narratives and cast of character’s I’ve ever seen in a video game, especially one of its length. I wholeheartedly recommend it to anyone into the visual novel genre, and even just to people who enjoy mystery and slice of life stories. That said, it does go on sale during most Steam sales, and is additionally available on PS4, and a Switch version was recently announced for Japan.

Monster Hunter Rise: How to get Acute Fang