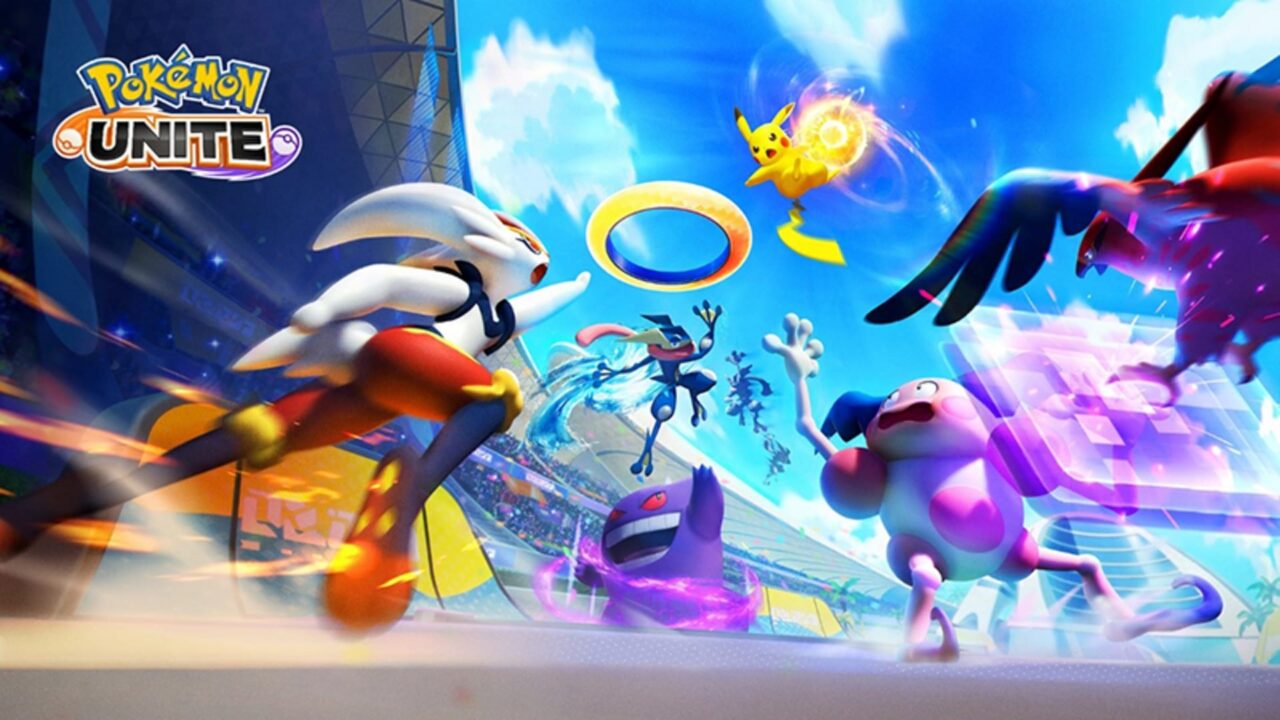 Nintendo and Tencent games have come together to create a surprisingly fun and accessible MOBA appropriate for any level of skill, but with a serious pay-to-win problem.

Pokemon Unite combines the tried and true gameplay design of an arena MOBA with the charm and familiarity of Pokemon in a solid way. Here is our review of Pokemon Unite on the Nintendo Switch.

Pokemon Unite is certainly not pushing the switch hardware particularly hard, however, its vibrant visuals and colorful particle effects easily hold your attention without offering too many visual stimuli for players to process.

The chat system does not take up much of the screen and usually, any sort of alerts pings happen quickly and also have some sort of eye-draw to bring your attention to the information being presented.

Each of the various maps is charming in their own way, and definitely help to break up the monotony of only having one map for standard or ranked mode.

The main game mode of Pokemon Unite is intended to be its standard or ranked games which take place in Remoat Stadium, however, the quick match maps, Mer Stadium, Shivre City, and Auroma Park, really allow some of the creative level design that helps keep players engaged with battle-arena style game.

Pokemon Unite has a unique style that works well without necessarily trying to deviate visually too much from the standard Pokemon-style how games such as Pokken Tournament did.

The gameplay of Pokemon Unite may not seem like much beyond a typical MOBA at first glance, however with some unique elements being repurposed from the Pokemon RPGs, and tight core controls, the game can truly set itself apart from other games in the genre while still feeling familiar enough the veterans will have an easy time adapting to the games more unique mechanics.

The battles themselves are timed and take place as even teams of either 3, 4, or 5 Pokemon traverse the arena battling wild pokemon and the enemy team to collect points.

Each wild Pokemon has a point value, and if a player is killed while they have points, they lose a certain percentage of the points that they have accrued.

To win, players will need to have accumulated more points than their opponents through scoring goals by the time the match timer reaches zero, with bonuses available to players who have good objective control.

Occasionally, powerful wild Pokemon appear that will require you to work with your team and by taking them out you can allow your team to score lots of points or to help increase their potency in battle.

The matches themselves are pretty fast-paced (since there is a time limit) and in most cases, the faster you can farm and level up, the easier time you’ll have in the early laning phase as long as you work closely with your team to score points, secure kills, and capture objectives.

This has led to some Pokemon feeling much stronger than others depending on how long the match has been going on or how strong of an early game they had.

And the smart use of held items and battle items can help establish a strong lead or turn the tides of a skirmish.

Pokemon Unite has a lot of fun features to keep players engaged beyond just the standard gameplay. Many features from the Pokemon RPGs make an appearance in the game.

Pokemon evolve and learn new moves as they level up and can use held items to maximize their effectiveness just like in the main Pokemon RPGs.

However, a major drawback is the ability of players to spend real-world money on a currency that can allow them to quickly increase their stats by levelling up held items instantly.

Customization is also a large part of the content that Pokemon Unite provides. The game offers lots of cosmetics as both rewards and as items purchasable with the game’s various currencies.

There is a wide range of items for players to truly create trainers with a distinct style.

This monetization tactic of having a currency that can be used to effectively purchase in-game strength has unfortunately created a “pay-to-win” situation within Pokemon Unite, making it a major turn-off for many would-be players.

How fun is Pokemon Unite?

Pokemon Unite is a genuinely fun and engaging game with lots of endearing features to keep players coming back.

In just the time spend working on this Pokemon Unite review, I made it to expert rank without even noticing just how much I had enjoyed getting there.

Player customization is sincerely satisfying, and saving up for new pieces of clothing or a new Pokemon license makes grinding feel more rewarding.

Since most of the currently available pokemon are some form of attack type, the matches are quick and fast-paced which works well for its controls as it’s easy to use your full-burst.

Plus the variety of arenas in the various game-modes prevent the game from becoming stale too quickly.

While some may argue that the stat boosts from held items aren’t noticeable, the sheer numbers say otherwise as the difference between low-level items and high-level items is truly palatable especially in the early game.

Despite this though, Pokemon Unite still manages to be an exceptionally enjoyable title that is worth putting some time into. I know Greninja and I will certainly be back on the court once this Pokemon Unite review is finished. Be sure to check it out and see how you like it for yourself!

NEO: The World Ends With You is out right now

Pokemon Go: How to Evolve Nosepass Into Probopass