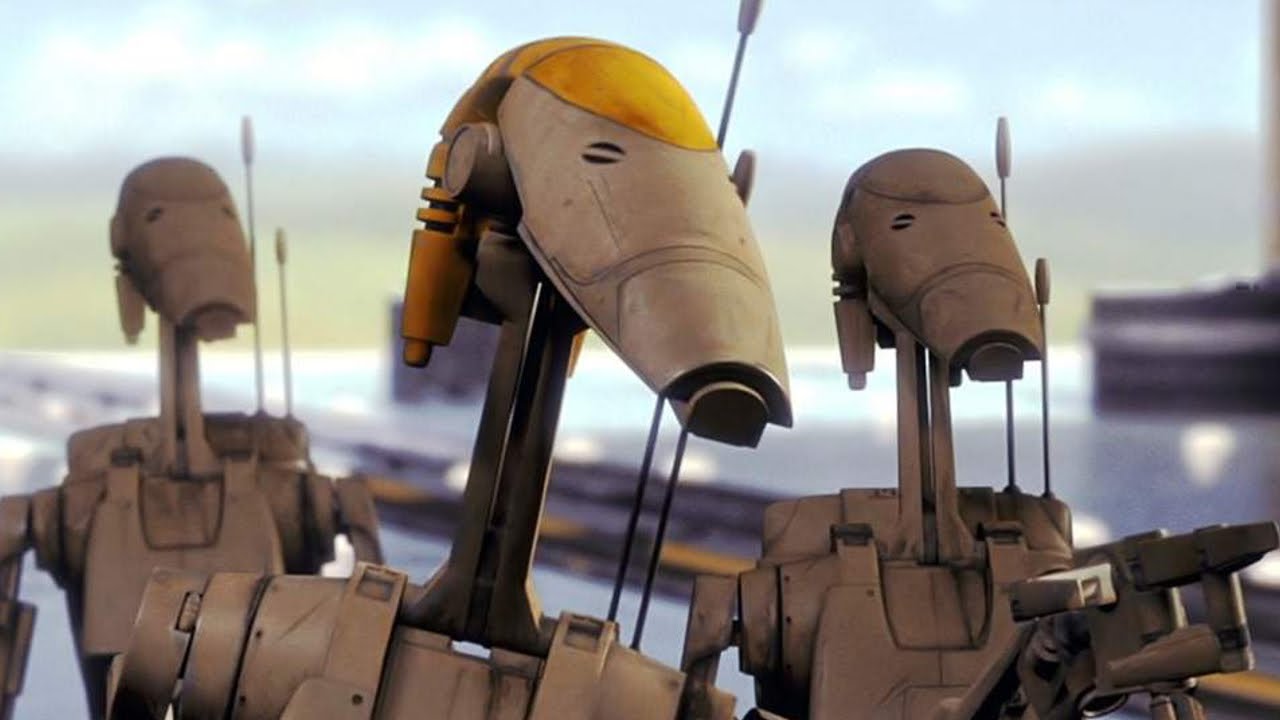 Of course, we couldn’t rank every droid in Star Wars. We’d be here all day and, frankly, how can we pick between Super Battle Droids and Droidekas. No, rather than a complete ranking… We’ve gone with the Top 15 Star Wars Droids.

Unlike the way we do rankings usually, it’s quite hard to statistically compare one droid to another. The Star Wars Universe is full of unique droid characters and it would be wholly unfair to compare a Battle Droid to a Protocol Droid statistically. That’s why we’re going to be even less impartial and make this one fully opinion based!

If you don’t know who Mister Bones is, you’re missing out. He’s a modified B1 Battle Droid that acts as a companion and/or hitman for Temmin “Snap” Wexley. He pops up in the Aftermath series, a trilogy of novels set during the Rise of The Empire and he’s a fantastic evolution of the B1 Battle Droids we see throughout The Clone Wars.

Why is he only fifteenth? Well… He’s creepy. He doesn’t quite operate on the same level as the others on the list, so he can only really follow basic commands. This, combined with his overly violent nature of doing business, makes him a droid that makes people uneasy to be around. He’s fun in a firefight but doesn’t really offer anything more than a standard B1, personality-wise.

IG-88B, to be specific, is who we’re on about here. As much as he’s a unique IG-88 assassin droid, he’s also a little plain? We don’t see too much of him and when we do he’s always trying to kill something. That’s why he’s so far down on the list, but also why he’s this high.

IG-88B is a bit of a badass, but he’s almost too much of a badass. He doesn’t really have that human touch you look for in a bounty hunter and that just makes him a little bit obsessive. It’s certainly not a trait we’d want in a droid companion, anyway. A bounty hunter, though? Eh.

4-LOM is more like a comical IG-88B, to put things very bluntly. He’s a rogue protocol droid that decided to try his hand at thievery and bounty hunting. He’s cold, calculated and as ruthless as any droid. Yet, the nature of his protocol droid programming does shine through every so often to make for an amusing exchange.

Much like IG-88B, he’s a bit of a badass but he doesn’t quite match up to a lot of the other droids in Star Wars because of his pretty basic personality.

On the flipside, AP-5 is a protocol droid with too much personality. He served as an analyst droid before defecting to help the Phoenix Cell and the growing Rebel Alliance, but he always found himself clashing heads with Chopper.

This led to some amusing moments, but on the whole, his pessimistic nature seems a little out of place in Star Wars. It even goes as far as to become a bit grating towards the end. We like him, but he’s against tough competition. Sorry, AP.

If there’s one thing Bucket is, it’s likeable. He’s a bit scrappy, as represented by his appearance, and overly protective, but that makes him all-the-more loveable. He features throughout Star Wars Resistance and is easily one of the better things about the series.

It’s clear that Bucket has a hard time trusting new people, but he does his best and we can’t fault him for that. Even though he doesn’t pop up in a popular piece of Star Wars media, he deserves as much of the spotlight as anyone.

K-2’s a fantastic character for a number of reasons. He’s loyal, witty, and has the timing of any of the Galaxy’s greatest comics. We only really see him in Rogue One, but his cynicism is a scene-stealing trait that only makes us want to see more from him.

Then, we have his sacrifice. It’s safe to say that it’s heartbreaking and a fantastic testament to his commitment and genuine friendship with Cassian Andor. We think he was a fan of Jyn Erso too by the end of it, but we’re confident he’d never admit to it.

Okay, this one might be a little biased but IG-11 is a complicated character. During his time as an assassin droid, he’s blunt to a point of it being comical. Then, when he is reprogrammed by Kuill he becomes a whole different beast.

While retaining his ability, the changes to his programming mean that he’s only focused on “nursing and protecting”. This is strangely heartwarming and, although he is a little bit more programming over personality, it’s hard to deny that he isn’t a fantastic character throughout his minor appearances in The Mandalorian.

CB-23 is one of those droids you’d love to have by your side. She’s loyal to a fault and isn’t afraid to get involved if her friends need help. We only see a bit of her in Star Wars Resistance, but she’s certainly someone you feel would rival BB-8 if given more mainstream screentime.

We also see that she’s a little crafty when it comes to things and she’s not afraid to use this superior situational analysis to her advantage. We like CB-23 and she deserves to be in more Star Wars media going forwards.

D-O is a strange one, but you can’t help but feel protective over this little guy. He’s a bit jittery and exciteable, but also clearly somone who is anxoius… Someone who is trying to heal. In a way, he is akin to a Rescue Dog in Star Wars: The Rise of Skywalker and this makes him all the more loveable.

He doesn’t do a whole lot, but you feel like his good nature was taken advantage of and it’s a heartwarming sight to see him finally being treated with respect and care by Rey, BB-8, and the rest of the Resistance.

We know this one is going to get us the most flak but he’s just kind of annoying. We can’t help it! C-3PO is always offering a counter-productive voice to the conversation and his self-centred, neuronic personality is beyond grating.

He always seems conveniently clueless at all the wrong times. For someone who’s meant to be programmed as an all-purpose protocol droid, you can’t imagine he’d actually be good at it. That being said, he is loyal and his worrying personality is a sign that he does care perhaps a little too much about those he considers friends. It’s hard to say he isn’t one of the best droids out there, but we certainly wouldn’t put him any higher than this.

This is where things get close. BB-8 is, by all accounts, a hero. He’s fiercely loyal to Poe Dameron but is quick to make his own character judgements and soon falls into a wonderful friendship with both Finn and Rey. Not only this, but he’s incredibly brave and repeatedly risks his life for his friends and The Resistance.

He may be a bit skittish at times, but BB-8 often pops up as a problem solver and is an ally that is truly irreplaceable. It’s obviously hard to compare one droid to the next, but we think it’s safe to say that he deserves his spot on the list without much question.

BD-1 is one of the most unique droids in the Star Wars Universe and he’s arguably one of the best. He accompanies Cal Kestis throughout Jedi: Fallen Order but he’s more than just a droid you use to open doors with.

BD-1 is fiercely loyal to those he considers a friend and often finds himself risking his own life without a second thought. He’s good-natured and studious, loveable and is arguably one of the most useful droid companions we’ve seen in terms of his wide toolset. The bravery BD-1 Shows throughout his appearance in Jedi: Fallen Order easily earns him this spot.

L3 is one remarkable woman and Lando Calrissian was right to stay on her good side. She is the only self-made droid on our list and perhaps the most self-aware. She knows her limitations, sure, but she’s made from enough different parts to make her damned fine in almost any situation.

She’s as passionate as they come, witty and largely self-less. Her struggle to push droid equality is one we can all admire and she was willing to give her life for something she believes in. It’s hard to think of another droid quite like her.

We know, we know. R2-D2 in second place?! What are you, mad? Perhaps. It’s safe to say that this list is a tight list and we could easily swap any one of the top 5 with one another. But, for the sake of rankings, R2-D2 nestles into second place in our Star Wars droid ranking.

Do we really need to talk about how much of a hero, R2-D2 is? He’s an opinionated little Astromech, but he’s loyal to a fault and deeply caring for those he considers friends. His assertive nature helps get things done and his adventurous nature and courageousness have also proven him a valuable ally throughout the Skywalker Saga. Artoo is an icon and no one can take that away from him.

Of course, it had to be Chop. Chopper is like R2, but if he didn’t give a flying f*ck. He’s overly opinionated, judgemental throughout Rebels, and enjoys annoying others. But, that’s why we love him right? He’s loyal to a fault and an adept problem-solver when he wants to be. It’s safe to say that the Phoenix Cell wouldn’t have had half a chance without him.

Chopper’s sarcastic nature makes him an incredible character and one you only want to see more of. His relationship with Hera Syndulla is a rare sign of mutual respect that shows how much the two trust eachother and it only deepens his character. At the end of the day, despite his bantering and cranky nature, Chopper always had the rest of Phoenix Squad in his best interests and was easily a part of their family. He is, perhaps, the best example of the “found family” theme so prevailant in Star Wars media.