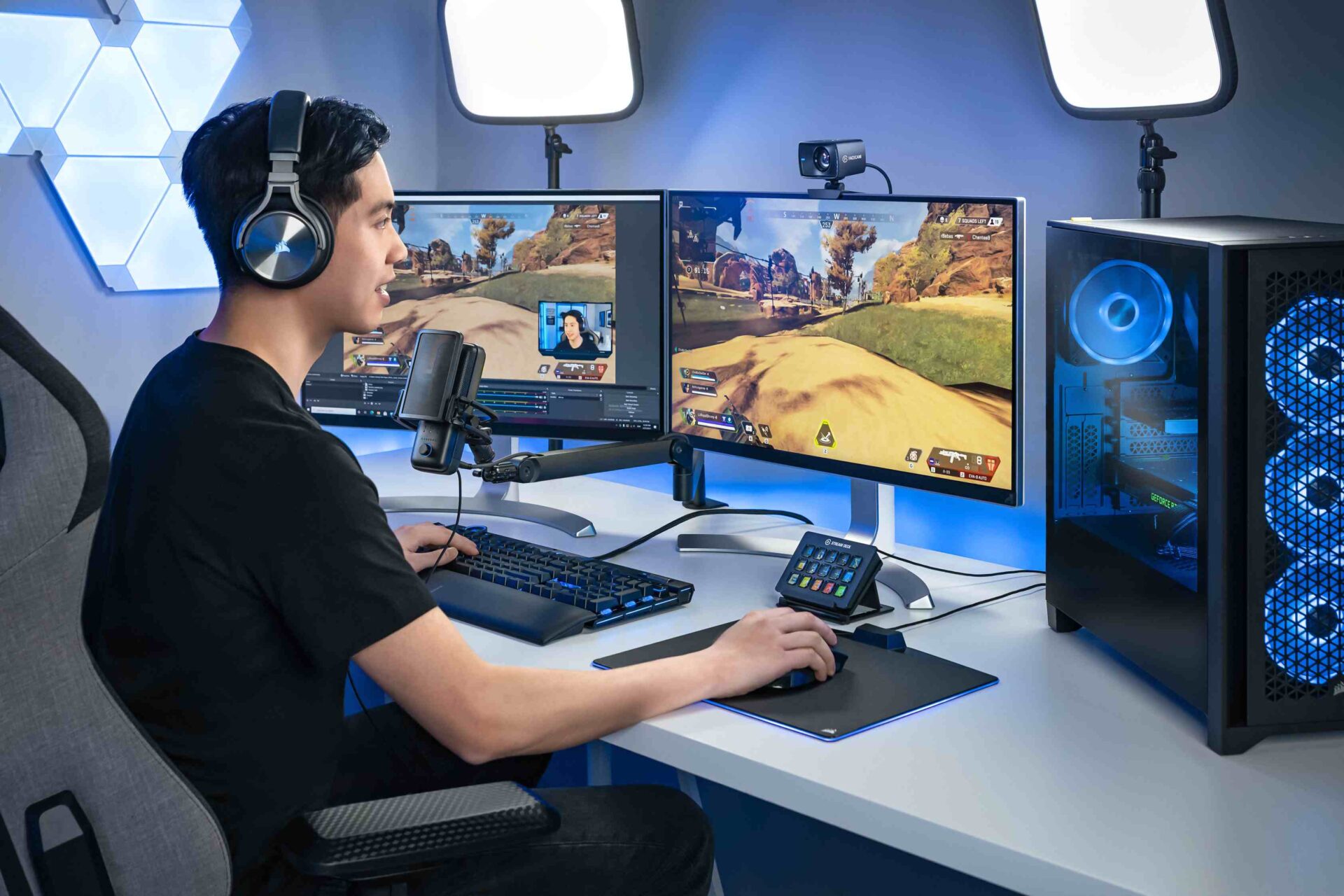 Elgato Facecam Review – A webcam designed for the serious streamer

In recent years we have seen Elgato become a one-stop-shop for all the needs of a content creator, and now they’ve added a webcam to their ever-growing lineup, the Elgato Facecam.

The company is responsible for one of the most popular capture devices on the market, the Elgato Capture HD, which allows for gamers to capture footage from their console or second PC to allow for video creation as well as streaming.

Over the last few years, we’ve seen the company produce the popular Stream Deck, allowing a streamer to control many elements of their live show from the small box, as well as various forms of lighting to help improve the quality of videos and streams.

With so many camera options on the market today, does the Elgato Facecam hold up? Let’s find out.

Since 2012, Elgato, which is now owned by Corsair, has been providing solutions for content creators and streamers, becoming a go-to brand for everything you need to create content on the internet.

First making their name with their capture card, the company has now expanded into lighting, microphones, the popular Stream Deck, and even green screens.

If you need something for your setup, there is a good chance that Elgato either make it or if they don’t they likely will in the future.

What Is The Elgato Facecam?

Elgato doesn’t mess about when it comes to naming their products, what it says on the box is what you’re getting.

The Facecam is just that, a webcam designed to show your face when you’re creating videos or streaming.

Featuring an uncompressed 1080p 60fps signal, the camera is packed full of features such as the Sony STARVIS CMOS sensor, a custom heatsink, dynamic image processing, and an 82-degree field of view, the Facecam is designed with streamers and content creators in mind.

The Facecam is connected via a USB-C cable to allow for uncompressed quality, and it can all be controlled with the Elgato Camera Hub software where every aspect of the image can be tweaked to perfection.

Here is the full specification for the Elgato Facecam.

With all of the technical stuff out of the way, let’s take a look at the Facecam itself and try it out in real-world conditions.

As with many other Elgato products, the Facecam comes in a compact blue and black box, featuring a very minimalist design with the logo and product name.

If you’ve used any Elgato products in the past then it is instantly recognisable, it is hard to deny that Elgato’s branding has always been on point.

Inside the box is everything that you will need, the Elgato Facecam, a USB-C 3.0 cable, and an instruction manual.

It is really great to see more products use USB 3.0, but it is a shame that products are adopting it faster than Motherboard manufacturers are.

Considering USB 3.0 ports also work with USB 2.0 products, there is no reason why in 2021 all Motherboards shouldn’t come with just USB 3.0 ports. With only a couple of ports on my Motherboard.

I do really like the fact that the included cable is lengthy. My PC and the Facecam’s new home on top of my second monitor is some distance away and there is more than enough cable length to reach it, as well as allowing me to add it to my cable management to keep my setup looking clean.

The design of the Elgato Facecam is very simplistic, it is a black box on a stand, it doesn’t need to be anything more than that so it isn’t.

It is much chunkier than many other webcams that I have used, which I personally like because it is packed full of features that justify it, from the rather large lens, the sensor, and even flash memory to store your settings. If you use it on another PC you won’t need to go and reconfigure them, it will just be a case of plugging it in and away you go.

One design feature I’m very glad to see is the inclusion of a cover for the lens. It was hard to tell in some of the pictures I’ve seen whether one was included.

While I tend to disconnect my webcam for privacy purposes, and the fact that it is extremely unlikely someone will ever hack your camera, the possibility is never 0 so having a cover is a huge plus. It is worth noting that the cover isn’t attached to the Facecam so make sure you don’t lose it. I would advise just putting it on your desk while the Facecam is in use and then just connecting it again once you are done with it.

One Of The More Pricey Webcams On The Market

This price makes it significantly more expensive than the Logitech Brio and StreamCam and the Razer Kiyo, instead putting it toe to toe in price with the Brio 4K Pro and Kiyo Pro, which both retail for around £199.

The Facecam certainly is a product I would only recommend if you’re at least a semi-serious content creator as it is a lot of money to spend on one aspect of your setup, but quality-wise it is about as good as you will get without at least doubling your investment to go down the DSLR camera route.

When listing other cameras above, you may have noticed I mentioned the Brio 4K Pro, which as the name suggests does 4K capture, whereas both the Facecam and Kiyo Pro max out their resolution at 1080p.

However, even if you intend on recording or streaming with the camera being full screen rather than a small box while gaming, 4K isn’t really necessary, with most streamers only ever going to 1080p due to bandwidth.

READ MORE: HyperX Fury S Pro Gaming Mouse Pad, is it worth your while?

If you’re primarily just gaming and having your camera scaled-down small to fit on the side of the screen as most streamers do, you will get little benefit out of having 4K capabilities anyway.

Here is a fantastic comparison video from Shevon Salmon that puts the Elgato Facecam, Brio 4K, the StreamCam, and the trusty C920 head to head to see which is best, and I can conclusively say that the Facecam provides the better quality when compared to the other models.

Like all Elgato products, the FaceCam comes with its own software which allows the user to really fine-tune the settings on the camera to get the perfect shot and quality that they need.

Many other companies use their own software for most other cameras, but I have never found it to work as well as the Camera Hub.

While using the Camera Hub software I was able to tweak different aspects of the camera such as the FOV, exposure, saturation etc to get an image I was happy with.

And then the settings can be saved onto the built-in flash memory so it can be recalled instantly without needing to set up the Facecam again when I use it on another device or with a new program such as OBS.

When it comes to the image quality of the Elgato Facecam I was thoroughly impressed by it.

As anyone who has used a webcam before knows, unless the lighting is perfect then it can be incredibly difficult to get a great image.

This wasn’t the case with the Elgato Facecam, especially with the addition of the Camera Hub software to tweak the image to my liking.

For the test images below I used a variety of lighting, with one having no lighting except my monitor glare from my two monitors.

READ MORE: Audeze Mobius gaming headphones, what should you expect with this $400 headset?

The second is using just a ring light, then just the room light, and the final being both the ring light and room light.

I also took the images at around 12:30 am, which meant there was no natural lighting in the room, which helps give a real-world example if you might be using the Facecam at night.

The images were taken inside the Camera Hub software at 1080p, and I think this would give a perfectly useable quality if recording or streaming full screen.

While gaming with the camera small on the screen the image quality will improve further.

Check out the images below.

With the quality I was able to get with just a few minutes of tweaking, which could be fine-tuned further, I am completely happy with the quality and will be using this as my webcam in the future.

But, with the trust C920 finally showing its age, if you’re even remotely serious about content creation or streaming, investing in a good camera is key, along with good lighting of course.

The Elgato Facecam is one of the best webcams I have seen and as good as you will likely get without heading down the DSLR route.

I have seen various criticisms such as the Facecam not having a built-in microphone, but as the camera is built with the streamer in mind and not someone doing their weekly Zoom meeting at work, no serious streamer would use an internal microphone so it seems pointless to include one.

While the camera only records/streams at 1080p, very few streamers go beyond this so it isn’t worth it right now to add 4K capabilities and charge more, but I’m sure once internet speeds catch up and 4K streaming becomes standard that Elgato will release a newer version.

But until then, 1080p is still the standard and isn’t really worthy of criticism for me.

The Elgato Facecam has one aim, to provide a great camera image for streamers and content creators with no unnecessary bells and whistles, but still packed full of all of the features that you need. It does just that and it does it well.

The Elgato Facecam was provided by Corsair for review purposes.

What If Episode Titles Leaked

What exactly is the Azeron gaming keypad?